Degendering fashion is about more than unisex tracksuits. Ceci Mezzi takes a look at the pioneers exploring their own style regardless of gender, and the sustainable brands championing degendered fashion.

A Short History of Gendered Dressing

Between 1848 and the late 1920s, more than 40 cities passed laws specifically targeting a person “wearing the apparel of the other sex” as part of prohibitions against “public indecency”. It used to be illegal for people perceived as men to wear dresses and for people perceived as women to wear trousers. Later on, as women burned their bras (symbolically if not literally), US department stores created special sections for unisex fashions, though most of them had closed by 1969. In the 1940s, ’50s and ’60s, police in the US arrested LGBTQ people based on an informal “three-article” rule. At that time, you had to be wearing three articles of clothing appropriate to the gender you were assigned at birth, or else you would be arrested for cross-dressing. In LGBTQ circles around the country, this was known as the three-article rule—or the three-piece law. It was referenced everywhere—including in reports about arrests in Greenwich Village in the weeks and months leading up to the 1969 Stonewall Riots.

More recently, musician Harry Styles has been ‘breaking’ the internet thanks to his de-gendered style of dressing. In his sensational US Vogue cover shoot, not only was he the first solo male to appear on the magazine’s cover, but he did so while wearing a dress. The result? Equal parts praise, and backlash. To perform at the 2021 Grammy’s and of course win an award, he wore a leather suit with nothing underneath and a green feather boa. Main stream faces such as his that show up proudly for their own personal style, are helping to highlight the conversation around gendered dressing.

Fashion As Freedom Of Expression

Fashion is intrinsically intertwined with self-expression; therefore, gendered clothing has been a norm directly connected with a binary determined by society. Accepting a binary norm implies the exclusion of whoever doesn’t fit into such a restrictive structure. Even though tailoring and menswear became accepted for women in society, we have a long way to go for gender non conforming people to be able to dress in the way they want. According to activist, author and performer Alok Vaid-Menon (right), there is a real need to #degenderfashion. What does that imply? It implies going beyond the gender binary, and as a result, it will truly help to create a world where gender non conforming people will be safe in public.

What can we do to make fashion more inclusive?

One step towards inclusivity is becoming familiar with a vocabulary that defines concepts around gender, fashion, self-expression and self-determination. The words that are pertinent to fashion are gender identity and gender expression. To start, a person can be assigned one of three sexes at birth; male, female or intersex. Then comes gender identity, which is what one identifies themselves as. Gender expression however, which is how one dresses to express themselves. 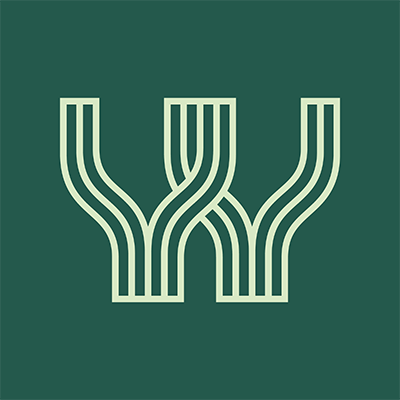 Do you work in sustainability?

The WIP is our new digital platform for eco aware brand founders, entrepreneurs and side hustlers. It's a place to find community as well as learning resources. Launching this Winter, you can sign up for updates below. 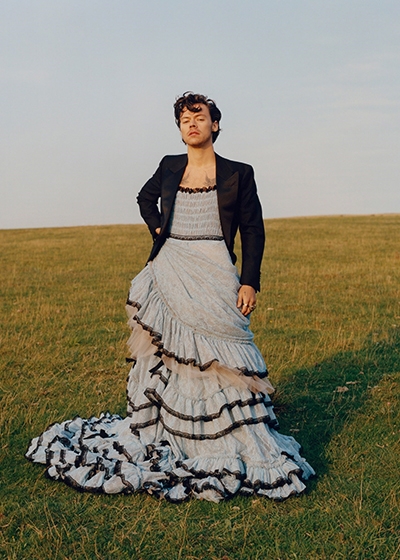 What’s the difference between unisex clothing and degendering fashion?

Ashley Morgan, from the Cardiff Metropolitan University, wrote the academic paper “Why the Terms Unisex and Gender Neutral are not Fit for Purpose in Contemporary Clothing and Fashion Design”, in the Journal of Textile Science and Fashion Technology. To use her own words: “The word unisex when applied to clothing, very simply describes clothing that both men and women can wear interchangeably, such as jeans and t-shirts. This term seems to have been adopted by fashion and clothing companies to suggest that they make clothing that can be worn by anyone. Yet, the fixed nature of sex is both contestable and regularly contested (…) – is there still room for this term in clothing and fashion (…)?”

If we want to degender fashion, that means we shouldn’t necessarily need to turn to unisex clothing to have a more inclusive fashion system. In unisex clothing, the designs are a white canvas made to include customers beyond their gender identity. Unisex items don’t necessarily push the boundaries in terms of what they’re creating. The silhouettes are accommodating to any gender, but they don’t necessarily disrupt the norms of who should wear what. Degendering fashion means not associating design with someone’s gender identity: whatever clothing you’re wearing, I won’t make any assumptions about you. At the end of the day, it’s as simple as that. And to degender fashion means to include such a simple statement in its structure. Don’t get us wrong, we believe the availability of unisex clothing is wonderful. However it shouldn’t be the only option available, especially for non-binary, gender non conforming folks. What degendering fashion basically means is: get creative, and have fun!

How can we make shopping more inclusive?

Of course, just because a garment is gendered in a clothes store, that does not mean that you can’t shop in any section you like. But our shopping experience needs to reflect inclusivity. The vast majority of e-commerce websites have their websites split into two halves: one for menswear, one for womenswear. New and existing industry players are making strides to be more inclusive, but established retailers and brands still separate their stores and web sites according to gender, and it’s for only two genders: men and women. New sustainable clothing platform SlowCo separate their clothing by Femme and Masc, leaving the customer to decide how they wish to shop. Similarly you can also shop by values like Re/Upcycled or Made In Europe, which includes both Femme and Masc options. 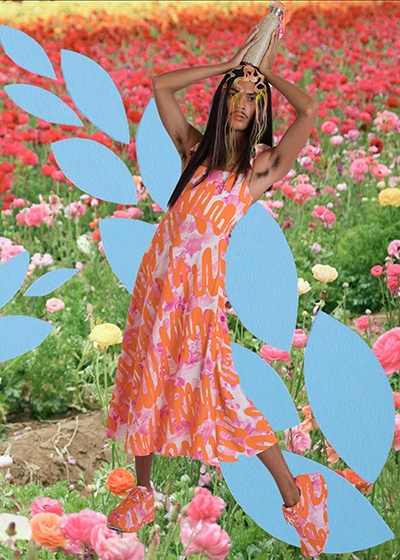 In March 2015, London department store Selfrdiges gave itself a makeover dubbed “Agender.” Three floors of its Oxford Street emporium were transformed into gender-neutral shopping areas. The temporary pop-up shopping experience—or experiment— showcased androgynous mannequins wearing unisex garments. The store’s website got a similarly sexless redesign, displaying the same products on both male and female models. This is a wonderful example of how retailers can and must reassess their merchandising strategies. Similarly fashion designers must reevaluate how they represent their audience in their collections, and the industry must learn the vocabulary. 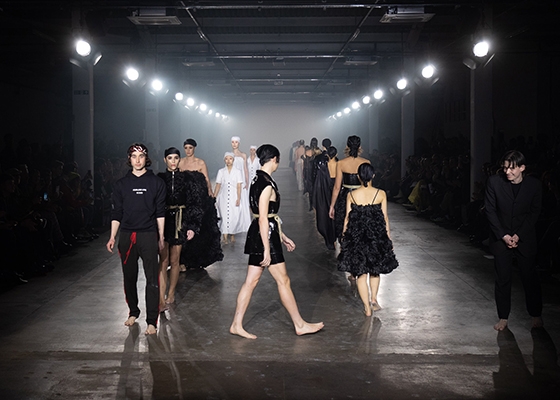 In terms of degendered fashion, the UK is host to some excellence in the field. One of the most talked-about shows of the last few seasons has been, without doubt, ART SCHOOL (left). Directed by designer Eden Loweth, in May 2018 they joined the ranks of some of the most prominent British designers, creating a LIVEstudio for Nick Knight’s SHOWstudio. You can see some of the most diverse castings in the piece, without giving up any drama. It features tailoring, but also gowns and dresses but who gets to wear them goes beyond the binary. The result? Pure magic.

Matty Bovan is the London based fashion designer investigating the intersection between sustainability and degendered fashion. Matty Bovan’s studio operates in a sustainable way in that his main focus is deadstock fabric, end of line materials, and yarns, as well as studio off-cuts. Many of the accessories and clothing hardware feature found items and re-appropriated objects. These objects highlight the unique elements, and the studio is constantly undertaking research and education in preparing for its future footprint. New York-Based Collina Strada too has been a disruptive voice since day one. Their ethical garments embrace a fun, playful and free approach to design, without making any presumptions about what fashion should look like. Their shows at New York Fashion Week are always an exciting exploration of gender, age and race.

We still have a long way to go, but fashion is becoming a more healthy industry than ever. tonlé is the sustainable French fashion brand working to disrupt gender binarism in the fashion industry. Recently the brand partnered with Christopher, aka Plant Kween, (right) on a collabrative collection. Designed to celebrate self love, community care and Christopher’s love, plants. Their gender-inclusive line allows fashion to be a form of self-expression and joy. The pieces are zero waste, made with reclaimed materials, and the entire range is inclusively sized from XS-3XL.

Did This Put A Smile On Your Face? Why Not Subscribe?

If you enjoyed this then theres plenty more on our email newsletters that you'll love. Whether you're a sustainable newbie or an eco conscious pro, our bi monthly emails will inspire you to live sustainably and ethically. 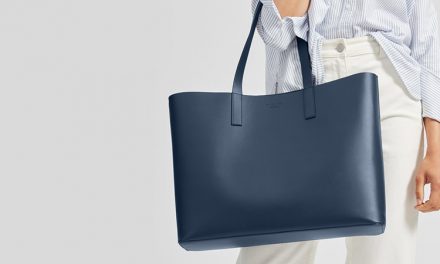 Back To Work Handbags 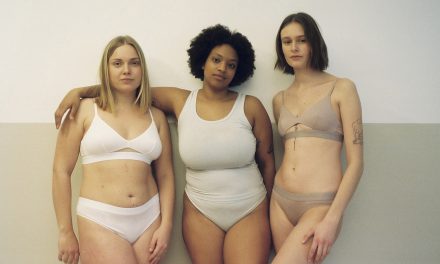 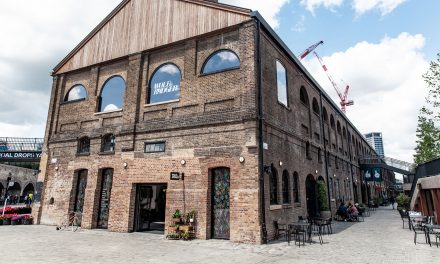 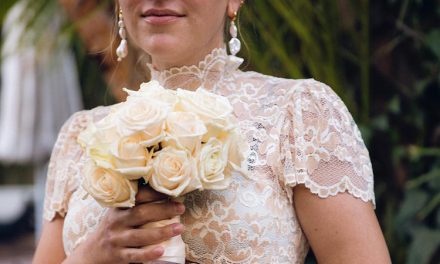